SSH and tools which can use it, particularly Git, are much more pleasant and secure if you can arrange to use SSH keys rather than passwords. You can find lots of articles on how to do various parts of this. Here I describe my overall approach, and the setup details that make it work.

I like to avoid generating unique keys for every context. But I do like to have a distinct SSH certificate for each role that I play, so I typically have one for work and one for my private projects.

I also dislike copying key files from place to place. There are two steps to avoiding that:

An SSH agent provides a socket that SSH will talk to. Simply setting the environment variable SSH_AUTH_SOCK to point to this socket causes SSH clients to try using it. If they fail to get an SSH key for the connection they're trying to establish, they usually fall back to password prompting.

The default ssh-agent available on most Linux systems reads the keys from files. But I solve the challenge using KeePass, and the KeeAgent plugin. Because I already have KeePass set up in a way that lets me share its data file across all the system I use, this avoids distributing copies of additional files. You can read more about this setup, and other tricks & features of KeePass on my page about how I use it.

KeeAgent itself is easy to use, so I won't go into details here. Configuring your environments to use it, and matching those needs with KeeAgent's configuration, is a bit complex. Following are details that worked for me on Windows 10. Corrections or updates to this information is welcome!

Once set up, this works reliably and seamlessly.

Tested on version 8.4.2.1, installed by Chocolatey as package mls-software-openss.

Note that the built-in OpenSSH software in Windows 10 is badly out of date, and I couldn't get it to work with KeeAgent.

Turn on KeeAgent's experimental "Windows OpenSSH" feature. This listens on a socket that is supposedly compatible with Microsoft's conventions for OpenSSH. You then need software that runs in WSL2 to pipe requests to that socket. This is done using a combination of socal (which you may have to install first using your package manager) and npiperelay.

See this how-to article for details.

Based on that information, I have things working pretty trouble-free in my environments. I created a Bash script that can help manage the process that does the forwarding in WSL2.

I have some shell code that gets run on each login in all of the environments I mentioned here, which sets up SSH_AUTH_SOCK appropriately. Look for the mentions of SSH_AUTH_SOCK in this file, which gets sourced by my .bashrc script.

You may also want to consider using Dotbot to manage your dotfiles for all your Linux-like work environments, like my dotfiles does.

Here's an example of what the KeeAgent configuration should look like: 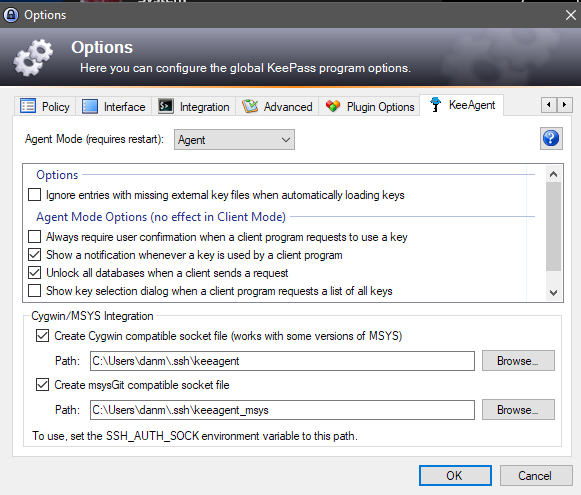 I tried, and failed, to get the "official" Microsoft win32-openssh chocolatey package to work with KeeAgent. This may have been my fault, I don't know.

I described above how to get this to work with WSL2. If you use WSL1, a different solution, which I have not tested, is required. See wsl-ssh-agent.